This post is a peep into the underground exchange markets for dollars and bitcoins in Argentina. For the last couple of weeks, I have experienced the informal exchange of bitcoin and dollars on first hand in Buenos Aires. Furthermore, I have realized how both locals and expats may reap significant gains by using bitcoins as a medium of exchange.

Before we dive into the details of the underground markets in Argentina, let me try to paint the picture of the current economic situation in Argentina.

For several years the Argentine inflation rate has been bumping around 25-30% per annum, according to figures published by independent institutions. The Argentine government doesn’t recognize the independent estimates and has allied with INDEC, the National Statistics Institute, to calculate inflation figures 2-3 times lower than the independent figures. The interesting fact is that the peso’s fixed exchange rate with the dollar is only taking into account INDEC’s inflation rate of 8-12%, causing overvaluation of the peso by not incorporating the true higher inflation rate. INDEC is indeed a neat implementation of an Orwellian “Ministry of Truth”, and the magic calculations have raised concerns with IMF who is threatening to expel Argentina from the organization.

Naturally the high inflation rate has caused capital flight out of Argentina, and every Argentine with a bit of savings is looking to exchange their pesos into something more secure. In order to stop the capital flight and fortify the central bank’s reserves, the government has implemented strict measures to prevent Argentines from obtaining foreign currencies. For example, only if you are travelling abroad are you allowed to exchange pesos for dollars legally, but there is a limit of 100$ per day abroad. Recently the government also imposed a 15% tax on all foreign credit card purchases, and a 50% custom duty on any goods which Argentines purchased abroad. Aside from the outrageous taxes, this legislation completely flashes your personal banking details to government officials, who can then snoop on your shopping list. 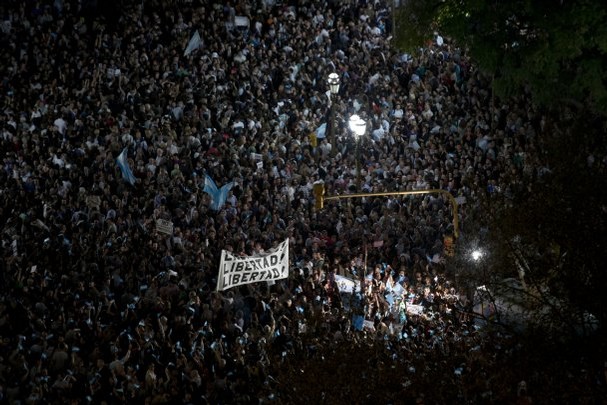 The complex regulatory environment has caused Paypal to suspend all domestic transactions in Argentina. Ebay and Amazon has followed suit with similar restrictions.

In Argentina the dollar you care about is blue. The reason is that the difficulty for locals to acquire dollars through traditional means has fueled a secondary dollar exchange market. The unofficial exchange rate, known as the “blue dollar rate”, is approximately 25% higher than the official rate.

For expats, it’s a no-brainer that you are being ripped-off by withdrawing cash at ATMs from established banks, where the withdrawal is conducted at the official exchange rate currently around $ARS 4.70 pesos per dollar. In comparison, if you exchange USD on the “blue market” you get around $ARS 6.20  pesos per dollar.

Luckily before travelling to Argentina, my girlfriend and I were tipped off to this news and carried along dollars in cash when entering the country. One can exchange dollars at the blue market rate simply by heading to Bs. Aires main shopping street, Calle Florida. Here lots of street vendors are drifting around advertising their business to anyone who looks like a potential customer. The street vendors here are known as arbolitos by locals. Arbolitos means “little trees”, a reference to the street vendors are full of “green leaves”. If you are looking to exchange dollars the street vendors will quickly approach you and provide a quote. If you accept the quote, you just head to a nearby jewelry or electronics shop and complete the transaction.

Above approach is generally safe but I wasn’t too keen on exchanging dollars with street vendors. Instead I posted a small note on an online forum and got in contact with a couple living in Buenos Aires, who were eager to exchange dollars for pesos at the blue market rate. The snapshot below is the result of this exchange – and what an underground dollar market looks like. 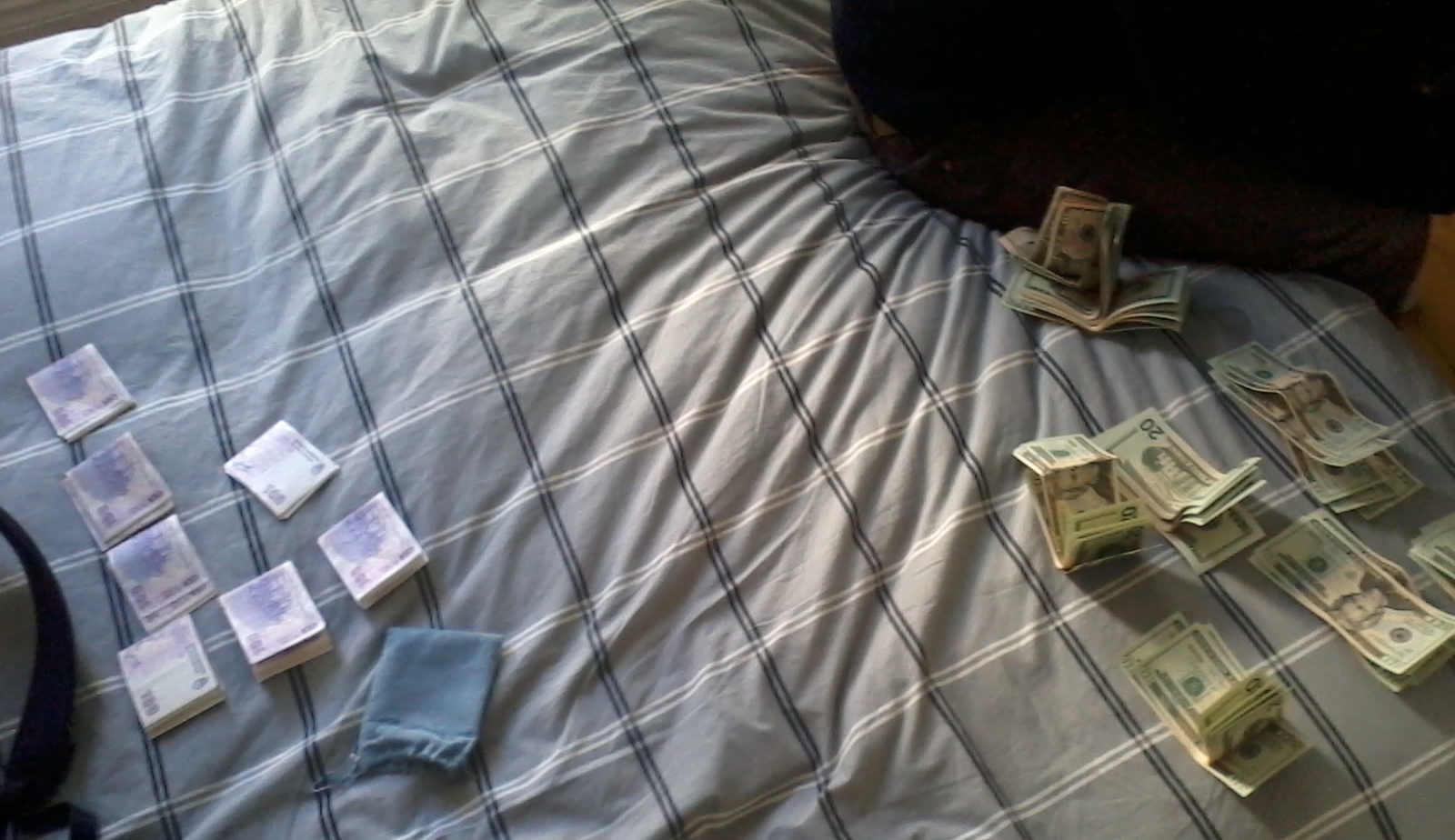 The dollars we brought into Argentina are soon running out, and we have been looking for alternatives to increase our dollar reserves. One approach is to cross the border to Uruguay – but you have the hassle of ATM withdrawal limits and the risk of travelling with lots of cash. There is also a service called Xoom, which allows you to transfer money from abroad to various pick-up locations in Bs. Aires. The magic of Xoom is that they somehow manage to provide the blue dollar exchange rate. Unfortunately they also require a US bank account to use its services.

Another possibility is Bitcoin, a new electronic currency, which has been flourishing online for the last couple of years. In our situation Bitcoin has turned out to be a great vehicle to transfer money into Argentina and achieve the blue dollar exchange rate. I completed my first bitcoin to pesos transaction last week and gained 25% in comparison to the official exchange rate.

The way it works is that you simply buy some bitcoins online through one of the many bitcoin exchanges. Mt.Gox is by far the largest but there are local alternatives as well, such as Bitcoin Nordic. Once you have your bitcoins you identify an Argentine who is on the market for bitcoins at the blue dollar rate. Given the economic situation there are lots of Argentines who are looking to get rid of pesos in exchange for other more secure assets.

In my case I circulated a note to Eudemocracia’s bitcoin mailing list announcing that I was interested in selling bitcoins. The price I offered was the Mt.Gox USD price converted to pesos at the blue USD exchange rate. Based on the number of replies this was an attractive offer, and after some email correspondence, I agreed  to meet up with one contact and conduct the transaction. After getting the agreed pesos in cash I made a one-click transfer of bitcoins to his online bitcoin wallet. A bitcoin transfer is instant and non reversible, and the picture below shows how we could confirm completion of the transaction on the spot. 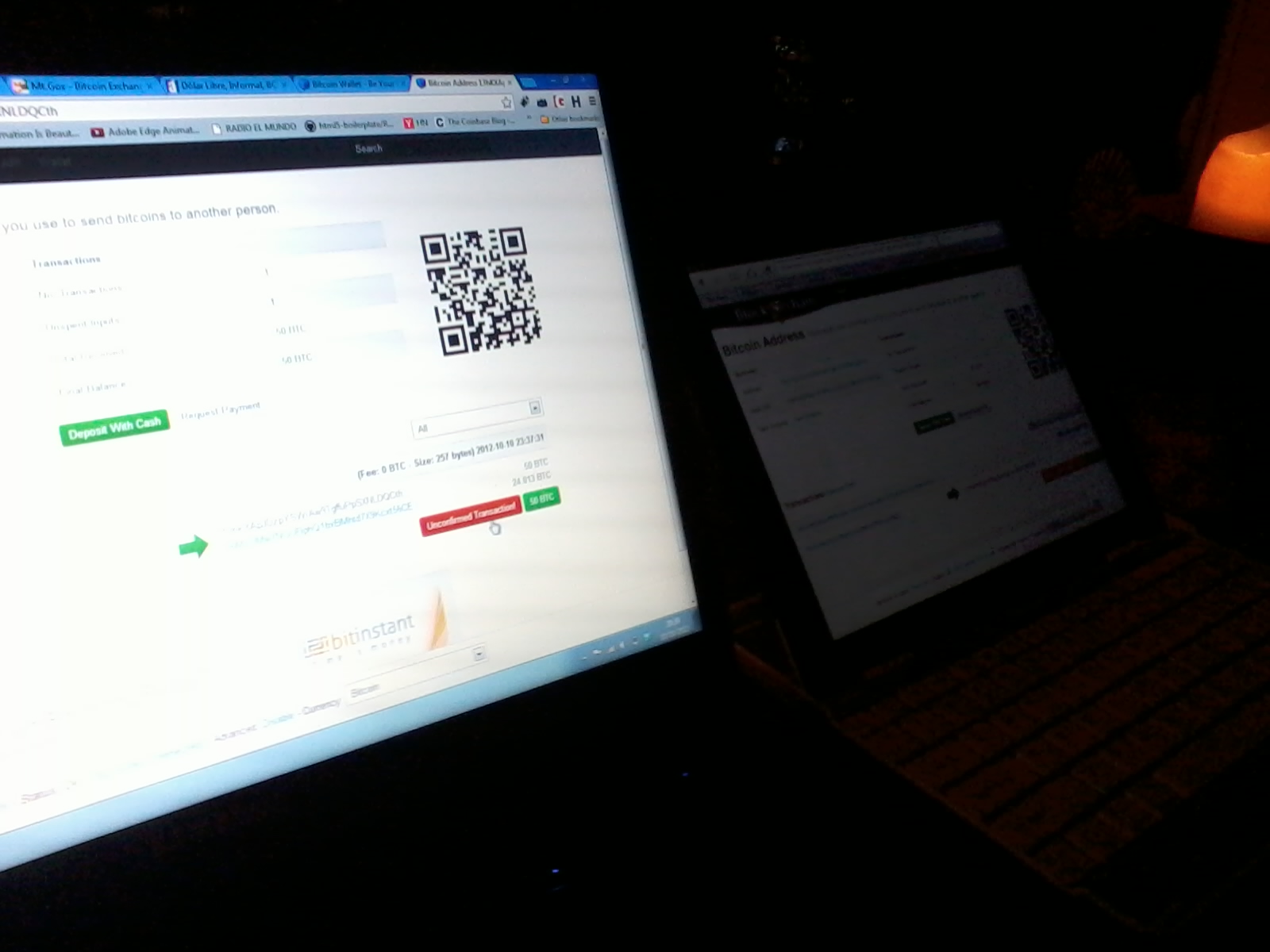 Because of the dollar restrictions and the escalating inflation the demand for bitcoins in Argentina is greater than our personal need for pesos. Therefore, if you are an expat or just travelling through I encourage you to explore bitcoin as an alternative to finance your stay. Not only will you get a 25% higher exchange rate but you will also help locals protect their savings from being hollowed by inflation.

I believe the bitcoin adventure is just kicking off in Argentina. Also I’m keen to see how the 200.000 Argentines demonstrating for libertad in the Plaza de Mayo might use bitcoin to fight the monetary restrictions themselves. Maybe it’s an even better approach than banging a pot?

25 thoughts on “Bitcoin, Dollars and Pot-Banging Protests in Argentina.”